Bolinas board battles safety of build out of cell antennas 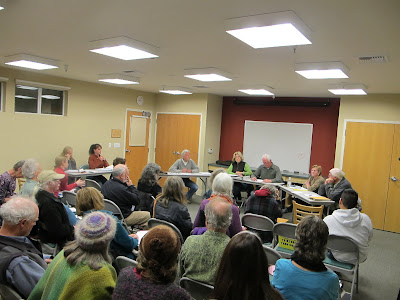 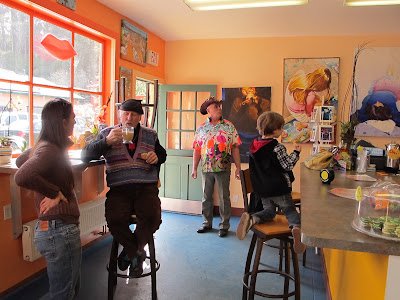 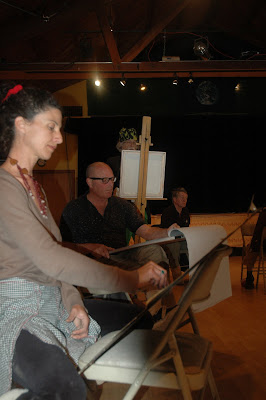 Adding a little shape and form to the local color, artists meet every Thursday from 9 a.m. to noon in the Bolinas Community Center for a figure drawing session. The new group is open to participants with any level of skill, beginners and old hats welcome. A sliding scale contribution of $10-30 supports the model and meeting space availability (Citizen photo by SF Dell)
Posted by Shari Faye Dell at 12:00 PM No comments:

A tree fell across Mesa Road at 1:30 a.m. Sunday morning creating what Bolinas Volunteer Fire Department’s Chief, Anita Tyrrell-Brown, described as the departments’ biggest fear.
The fallen tree blocked both lanes and brought power lines down with it, shutting down access to and from the Mesa for 13 hours.
Fear made manifest, earlier this year Tyrrell-Brown was quoted saying, "Our concern is with access, if Mesa Road is blocked by downed trees and power lines, residents living on the Bolinas Mesa will have no route out of town and our emergency vehicles will be unable to access a significant portion of the community."
Mesa Road is one of two routes to the Bolinas Gridded Mesa where 60 percent of the town’s population live. However, Terrace Avenue, the other route, has been closed since January 2010 after storms caused a section of roadway to sink with the drift of an eroding cliff.
Nearly two years of conversation, planning and the pursuit of funding have passed. Representatives from the Bolinas Community Public Utility District and the Bolinas Fire Protection District (BFD) are in on-going discussions with Supervisor Kinsey and the County's Department of Public Works concerning the condition of Terrace Avenue and the funding sources to restore it.
While concerned citizens weathered the recent storm, no life threatening incidents occurred as a result of the inaccessible emergency medical and fire vehicles.
The BFD began responding to calls with the first downed tree at 7:30 p.m. on Saturday. Additional trees fell on Olema-Bolinas, Bo-Fairfax, Juniper, Terrace and Mesa Roads. Members of the department worked through the night removing the trees and manning road blocks at three sites with downed power lines.
The storm that blew in Saturday caused power outages in Bolinas, Dog Town, Stinson Beach, Forest Knolls, Inverness, Lagunitas, Olema and Point Reyes Station.
Power to downtown Bolinas briefly went out on Saturday night. Power to the rest of Bolinas, Dogtown and the San Geronimo Valley was not restored until Monday.
Posted by Shari Faye Dell at 12:00 PM No comments:

For the Love of Baking

For the past six years Joyce Goldfield has played ringleader to a band of cooks, chefs, bakers and happy homemakers. Her annual bake sale not only feeds the lucky lookers who purchase the delectable treats but, the beneficiaries of the bake sale.
Through Heifer International, Goldfield’s bake sale funds go directly toward the purchase of livestock from fields near the needy families in Kenya, Uganda and Rwanda who will become the new owners.
With gifts of livestock and training, Heifer International helps families improve their nutrition and generate income in sustainable ways. The non-profit refers to the animals as "living loans.” In exchange for the livestock and training recieved, families agree to give one of the gift animal's offspring to another family in need. According to Heifer, “Passing on the Gift” is the cornerstone of their mission. This gift passing creates an ever-expanding network of hope and peace.
Any persons wanting to join the band of gift giving bakers are welcome to whip something up and bring it ready to serve to Toby’s Feed Barn on Saturday, March 19 from 10 a.m. to 5 p.m.
According to Joyce, the pies go quickly and early birds catch the worm.
Typically, new treats trickle in all day long, so do not fear what ever you are craving may soon appear. Amongst the Lemon Curd and the Devonshire Cream, I am told, vegan, vegetarian and gluten free treats are popular. This year expect several newly inspired Joyce baked muffins and spiced molasses cookies made from the prized acorn flour historically used by local Miwok, a valuable wild source of nourishment.
Over the last three years, the annual bake sale funds have been matched by various donors and have benefited families in China and Haiti.
More information about Heifer International is available on the web at < http://www.heifer.org> and at the bake sale.
CUTLINE:
Students at Papermill Creek Children’s Corner participated last week in decorating paper bags for purchased bake sale goods. Several photos taken of the children at that time will be sent to the families receiving the livestock. Pictured here, Andrea Reynoso, Ella Chen-Luftig, Jonathan Semorile, and Juan-Pablo Macia.
Posted by Shari Faye Dell at 12:00 PM No comments: