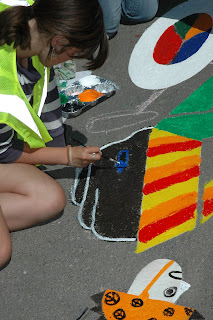 Ibarra Demmerle (pictured), joined volunteer students Gavi & Melea Emunah, , Jacob Klein, Debora Tevalan, Lianne Kelley and Orie Johnson-Young on the hottest and longest day of the year–the Summer Solstice–to beautify the Bolinas bike path. Also on board for the day were community members Walter Hoffman, Rachael Gertrude Johnson, Dale Johnson and StuArt Chapman; as well as Bolinas Stinson School art teachers Harriet Kossman and Kathy Bustamante. While keeping the volunteers in paint, supplies and water, Bolinas Community Path Improvement Project Volunteer Project Coordinator Bobbi Kimball, described the task of the day, “We really want to demarcate the path so it is safe for kids; the median does that to some degree, but having colorful stencils on the path really helps,” says Kimball.


The narrow strip separating the path from the main road into town was filled with road base following path construction last year. Kimball saw the need for improvement and spearheaded a plan, “The project was undertaken to benefit our community by better demarcating the bike path, creating a visually appealing plant buffer in the median strip, demonstrating the beauty and use of native plants and most importantly, improving the safety for bikers and pedestrians, especially our children.”

In February DPW removed the gravel and road base mix from the median. County staff then replaced the material with a blend of compost from the town’s own yard-debris-composting program, Resource Recovery, and county provided soil. Over the course of three weeks, plantable pavers, 1400 native plants and erosion control materials were installed, all by the labor of volunteers.


Fourteen-hundred colored plant marker flags were initially placed to show volunteers which native shrub, grass or flower to plant, but the markers have served a double purpose, drawing attention to the un-established natives and detering traffic from the area. In an effor to keep it clean and dynamic while plants establish strong roots, knee high signs were constructed and fitted with single lines of a poem. The poem unfurls as the passerby moves further down the path. The flags are scheduled for removal in July.

“This weekend we watered with a Water Buffalo on loan for the summer from project-supporter Rich Peterson,” says Kimball, describing a 300-gallon water tank on wheels that can be hauled behind a small truck. “We filled it twice and volunteers hand watered each individual plant; BCPUD is donating the water.”