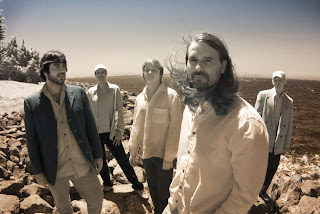 Garnering national success, Marin based jamband New Monsoon toured extensively for the better part of 10 years. Slowing down only when children came into their lives, the group has been hanging close to home for the last two and half years. “It has been one big season of growth,” says founding member Bo Carper. “Jeff and I are new to fatherhood. Ultimately, family life and the initiation of fatherhood lends a richness–a renewed sense of purpose and relevance to life. I think it is reflected and will continue to be reflected in our new music.”
While avoiding life on the road, the band has been busy writing new material and maintaining a rehearsal routine. “It has been a really important phase,” says Carper. “Our sound has been altered by having more time at home to focus on more creative aspects of our music. It is difficult to write and work when traveling.
“We have been focused on developing our harmonies, something we don’t get to do on tour.”
New Monsoon is poised to launch back into the scene with several upcoming Bay Area shows including Summer Music Fest at San Geronimo Valley Community Center this Saturday and an August 5th appearance at the Great American Music Hall.

Beginings
New Monsoon seeds were first sewn at Penn State University. As students, fingerstyle guitarist Bo Carper and keyboardist Phil Ferlino were members of All Shapes Ensemble, “It was very much the precursor to New Monsoon–in the musical approach and instrumentation,” says Carper. Ferlino was the first common denominator between Carper and guitarist Jeff Miller. Ferlino played in a cover band, Mosaic, with Miller. “Phil was friends with Bo and played in a group called All Shapes and we’d all get together and jam. I was most impressed with how many original tunes they’d written,” says New Monsoon Co-fouder Miller.

Go West
After college, “I had decided to move to California but didn’t really have a plan,” says Carper. He called up a cousin living in California. She suggested he come stay with her in Bolinas till he figured out what he wanted to do. “I thought I would end up in Southern California,” Carper explains, “pursuing a career in film production, the focus of my education at Penn State.”
“I arrived at her place May 10th 1994, in the middle of the night,” Carper says, clearly invoking a memory that still awes. “I woke up the next morning surrounded by her flower garden bursting with every imaginable blossom and I could see the ocean just down the hill from her place above Duxbury Reef. I said, ‘Wow, I hope I can stay here,’ and it all just fell into place.”
Carper met a music teacher who, at the time, worked for (now defunct) Full Circle, a non-profit residential all-boys school focused on special education needs. “I volunteered to teach some guitar. One thing led to another; suddenly I was working there,” says Caper. “I was there for nine years.”
Meanwhile, Jeff Miller moved to Boston to study music on the scene. “I wanted to learn Jazz. We’d go to Ryles, Willow Jazz club, Regattabar. I was pretty obsessed,” says Miller. “I had a group called Lifeline Trio which ended up making a CD and performing in those same Jazz clubs.
“I got my fill of Boston and wanted a change, so I called Bo.” Miller moved out to San Francisco in May 1997.
Guitarists Miller and Carper joined forces, drawing the name from emotional and climatic (El Nino) trends, New Monsoon solidified. That same year, they played their first night at Smiley’s Schooner Saloon in Bolinas.
Several years into Bay Area gigging, “The band made it to what I call second base in 2001 when we were invited to play the High Sierra Music Festival,” says Carper.
“Phil Ferlino, after years of trying to recruit him, moved out to California just before the festival,” says Carper.
The first iteration of New Monsoon had grown into a seven-piece World Music Jamband featuring a gamut of instrumentation: acoustic and electric guitars, banjo, lap steel, mandolin, organ, keyboards, bass, didgeridoo, timbales, tablas, and congas.
“Fast forward, we played a bunch of gigs and toured a lot.”

A second decade
“We have had some ups and downs–some amazing times experiencing degrees of great success, as well as, some challenging times just trying to keep it together,” says Carper. “Any band that has been together this long goes through changes. Membership changes are hard. Filling new rolls and adjusting to the absence and opening up to new members.
Adjusting to changing attitudes of fans as the band evolves: All challenging.”
Core members–Carper, Miller and Ferlino–adopted six-sting bass player Marshall Harrell in 2008. “He is a great player. Tremendous. Talk about important eras for the band–our ups and downs–one of the biggest ups, one of the best things that has happened to us, I think,” says Caper, “in terms of finding renewed stamina and creativity? When Marshall joined the band. He really carries a lot of weight. He is a contributor in every way.”
New Monsoon’s most recent drummer, Brooklyn based Sean Hutchinson, has been playing with the band for about three years. Flying Hutchinson in for shows has proven difficult. So the group started looking for a local drummer.
Through several different channels the group connected with drummer Michael Pinkham (Albino, Samba do Coracao, Lagos Roots Afrobeat Ensemble). “Turns out he [Pinkham] lives in Bolinas and plays in a band with Steve Trivelpiece (This Old Earthquake),” explains Carper. Coincidentally, the first drummer Carper and Miller drafted in 1987 was, at the time, playing in a project with Trivelpiece. “Michael has done a handful of gigs with us, has other band obligations but, we are hoping to do more gigs with him. He is a great drummer. Hand drums–many styles–and a strong afro-cuban sensibility. Even on the two-step he finds a way to make it really funky, adding color to our sound.”
“We have had a lot of interesting connections in Marin; and support.
“One of the things that has very cool for us, John Cutler helped us engineer and mix our fifth record, New Monsoon V.” says Carper, noting that Cutler mixed live albums for the Grateful Dead. “Michael Shreve, drummer for Santana, produced one of our records. That was really cool.”
New Monsoon has shared the stage with heavyweight guests Mike Stern (Miles Davis), the late, great Martin Fierro (Zero, Legion of Mary), Steve Kimock, and Tim Carbone (Railroad Earth), to name a few. They've toured with String Cheese Incident, Michael Franti and Spearhead, Umphrey's McGee (Big Summer Classic Tour), supported Moe, The Wailers, etc and are a featured headliner in venues such as the Fillmore (SF), Gothic Theater (Denver), and Warehouse Live (Houston). They are also a perennial favorite of the festival circuit including marquee festivals like Bonnaroo, Wakarusa, Langerado, High Sierra, Telluride Bluegrass, Austin City Limits and many others.

Rolling
“I wouldn’t say that I am surprised the band is still together, I am very grateful,” says Carper, “that we have been able to keep the core together and grateful for all of the people who helped get it rolling and keep it rolling over the years.
“We have navigated the ever-evolving landscape for more than ten years, we think we can do twenty more years.
We feel we have reached a point, a life long commitment–We hope to keep it rolling until we are too old to get out of bed.”