Right of way on the left coast

While Marin County Department of Public (DPW) works is actively pursuing geotechnical evaluation and funding to restore upper Terrace Avenue in Bolinas, additional safety concerns emerge. “The area around the slide is not safe, it has not been safe for sometime,” says Craig Parmley, road maintenance superintendent for Marin Department of Public Works.
While access concerns still press upon residents and local municipalities, the widening, deepening section of slumped roadway prompted DPW to post additional road closure signs last week. 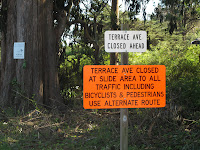 Noting that sand, not soil, is all that supports the remaining chunks of roadway, Parmley says DPW believes any activity around or near the slide poses a great threat to individuals.
On Monday, the department completed installation of a six-foot cyclone fence at both ends of the slide site closing off the remaining narrow path of crumbling asphalt to all traffic, including bicycles and pedestrians. “My hope is that the fence deters people from the active area of the slide,” Parmley explains, noting that on a previous visit to the site he witnessed children climbing on the collapsing roadbed.
Recent storms knocked tons of asphalt into the growing pit, as well as dislodging the dangling county maintained storm drain that routes Overlook runoff.
One resident, preferring not to be named, told the Citizen he had stopped by the corner of Overlook and Terrace earlier that day to see the new development. While he was there, a biker, holding his bike in one hand, used the other hand to pivot around the cliff side fence post, proceeded across the narrow path and then pivoted again around the second section of fence. “I think that this is very nearsighted,” he said. “People have always gone down Terrace. [One of two roads leading from the residential populated Mesa to downtown Bolinas]. It [Terrace] is especially desirable now that there is no through [automobile] traffic. People choose that route because they want to stop and look out at the ocean from Surfers' Overlook.
“People often go to Surfer’s Overlook just to determine whether or not hey want to go to the beach.
“If you are walking or riding a bike [in to town], it is half the distance of taking the bike trail or Mesa Road, besides the bike trail is in terrible shape, it has had no maintenance in two years.”
The Bolinas Community Public Utility District General Manager, Jennifer Blackman, sent out a letter to community members last week informing residents of county plans to close the road to “ALL” access. In the letter, Blackman goes on to say, “Fortunately, there is an alternative route for pedestrians and bicyclists to travel from the Mesa to the downtown area – and that route is the new BCPUD pedestrian and bike path that runs parallel to Mesa Road (beginning at the intersection with Overlook), past the BCPUD lab building, then through the eucalyptus grove and down to the Resource Recovery Center.”
Posted by Shari Faye Dell at 12:00 PM